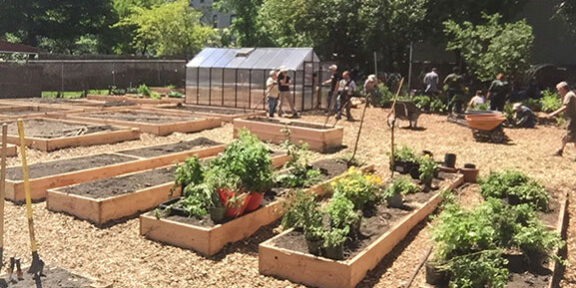 Second time writer (for those of you that caught the Wine Club newsletter last year), longtime fan and humble employee here to share an AWESOME community service trip experience with you. We at Clif Family consistently try to support our local community and at the beginning of June I was able to make a trip to The Bronx with In Good Company to share that mentality with another community.

The trip consisted of completely cleaning up and revamping a community garden, the Garden of Youth, on 182nd Street. Once a vacant lot, potentially a building that burned down in the 1970s, the space was converted to a community garden by some of the local residents. Their efforts largely succeeded in transforming the 9000 square foot space however until June 2017 it still contained and an immense amount of debris, rotten wood planter beds in need of replacing, overgrowth, and carpet (yes carpet, lots of it).

Upon arrival we were able to work with the community members, the head gardener, Mary Mitchell Center, New York Botanical Garden, Bronx Green Up and 19 individuals from 13 other like-minded companies to completely transform the space into a fully functional garden and education space for local youth. After two full NYC garbage truck loads of debris we were able to start reconstructing the garden with over 20 planter beds, a greenhouse, BBQ pit, benches, tables, compost bins, and activity spaces for the local children.

Just two weeks later (as of June 23rd) a half dozen school groups have already started utilizing the space as well as 49 other community members who have signed up to obtain their own gardening plot in the Garden of Youth.

In an amazingly short six days we saw a complete transformation not only within the garden but within the community members who joined in on our efforts. New friends were made, stories were shared and a little bit of hard work showed how easy it is to make an immense difference within a community. In short it was an honor to be a part of the project through Clif Family and In Good Company!
Mike Anderson